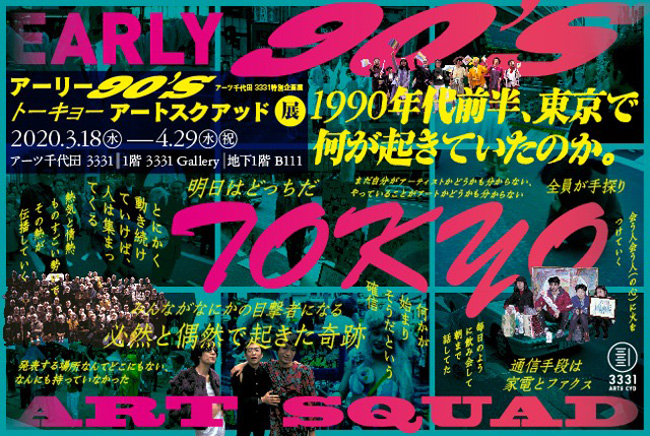 The exhibition welcomes a reinvestigation by Ms. Min Nishihara of a young generation of artists whose activities were centered in Tokyo during the early to late 1990's. It reflects on their boundary breaking use of streets and alternative spaces as a stage for dynamic actions that dug deep in search for new culture. Consisting of videos and records from the era, as well as reconstructions of artworks and footage of artist interviews, the exhibition presents archives that are the essential core to these activities.


[Summary of Exhibition]
In 1989 the Berlin Wall literally collapsed. Meanwhile in Japan, the 80's marked the end of the Showa Era. March 1991 to October 1993 signals the first cultural setback encountered by Japan's post-war generation - the burst of the economic bubble. Many artists whose works are displayed in this exhibition grew up along the upwards line on the graph of the high growth period GDP. When they tried to take a step into society, the ground beneath their feet was very unstable.
What was happening in Tokyo during the early 90's? The artists of the time did not necessarily form groups*, nor can be categorized by any particular movement. To date, no appropriate title for them exists. Even artists in today's scene, who are now active in Japan and across the world, did not have anything during those days. However, one certain quality is that they gathered and discussed repeatedly. They asked questions like - "What are we doing?", "What should we be doing?", "How far should we take it?", "What is art?"
This exhibition attempts to investigate what made it possible for these early 90's artists, driven full of vigor, to unleash art projects right in the streets. I see their gathered works as the portrait of a "Squad", a group of artists that tried to light the flame of art in all the people they encountered.