Menu
JP
Schedule
About
Facility
Visit
Information
Get Connected
Contact
HOME
Important Notice due to the declaration of a state of emergency (January 8, 2021)
Home > Schedule > 3331 GALLERY #21 yang02 + So KANNO "JIZZED IN MY PANTS" 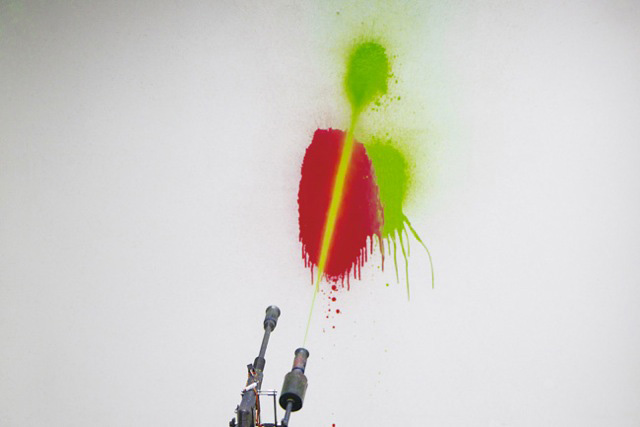 There is no point in passing further praises upon the SENSELESS DRAWING BOT#2, there being little doubt that it excites people of all ages through the very action of moving and shooting out paint. That is quite enough in itself and demands first-hand experience. But if I am forced to add some further comment, perhaps I would go as far as to say that this machine is the embodiment of "Hope". It is the shape of hope in the present tense, served by a fire of color. The internet has long lost its promise of freedom, becoming an inhospitable space populated by those who insist on a misplaced sense of justice, against which we have lost the spirit to fight. In times like this, it would seem that the only effective way to regain hope is to boldly yet obediently call upon an animal-like force. And at this moment the very incarnation of such a force may be found within this BOT.

yang02
Making artworks using digital media as medium. And those works having keywords such as public nature and character representation as concept.
http://yang02.org/

So Kanno
Using electronics and programing, aiming to create a new expression by binding characteristics of several technologies. Making Kit of the works, Having performance and workshop with using the works.
http://kanno.so/