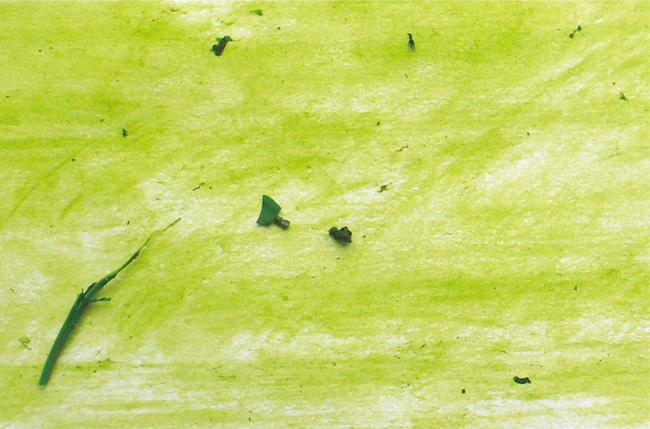 An Impulse of the Wild

I would not go as far as calling it "fondness", but I have a particular attraction to plants. From the time that I was a child I could not be parted from my plant encyclopedia, and even now when I come across grass growing up through a crack in the asphalt road, I can not help but be captivated.

When I heard that Murayama paints by rubbing actual plants onto the canvas, I was compelled with intrigue. In the moment of painting a vivid array of colours and scents are given rise to in an action which is in fact strongly induced by the impulse of the wild, an impulse which can not be put into words and which we pretend to have forgotten in everyday life.

Our relationship with plants is long and deep, and it seems at this time of questioning our own existence, we should take the opportunity to rebuild this fertile relationship. Murayama's work presents a subtle yet sincere step towards this.


Takashi Serizawa, the director of P3 art and environment

Murayama was brought up in an environment close to nature and during his late teens he would collect plants from the dry riverbed, using them as the subject of highly detailed pictures .
Then as he entered university he continued to create work using the motif of plants and pursued a consistent concept, although once going through a period in which his focus led away from plants in his late 20's.

In his 30's he moved to the inner city, living in a condition distanced from nature, or with "an absence of nature", and so attempted to recall his memories of the touch of grass, the aroma, the soil beneath one's feet, consequently impacting upon the direction of his work from this point.

It is through this history, pursuing the memory of plants held within the body that he came to create the new technique of "Plant Painting".

When we look upon this work, which is drawn through the direct use of plants as a medium, we are not in the position of the audience but as a coexistence.
In this current time when there are many different thoughts towards the relationship between nature and humankind, the work of Murayama quietly, yet with a strength reflecting the power of life, expresses the basic form of existence of this relationship.

We welcome you at the start of this new year to experience the glimmer of these plants which vibrate through the artist.


Shujiro Murayama
Born in Tokyo, 1969. Currently undertaking a PhD in Muriel Painting at Tokyo University of the Arts, in which he is pursuing the technique of using raw plants to draw upon walls and paper. As a technique which he himself invented and coined as "Plant Painting", it is a unique expression that brings forth the vital essence of plants. Murayama is also active in realizing various projects by bringing plants and communities together.