Menu
JP
Schedule
About
Facility
Visit
Information
Get Connected
Contact
HOME
Important Notice due to the declaration of a state of emergency (January 8, 2021)
Home > Schedule > #005 The Heart is Not Here | Ayato Fujiwara 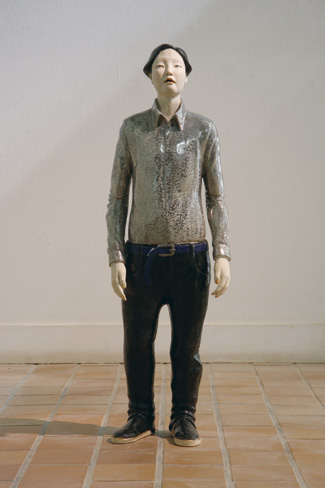 "The ceramic figures of Fujiwara come to life as soon as the kiln door is opened."
Ayato Fujiwara creates ceramic statues using sculptural as well as ceramic techniques. Inspired by the structure of Utsuwa (vessel) itself, Fujiwara explores conflicting ideas such as the inner/outer surface of human beings and the light/shadow of form, the positive and negative which complete the whole, while creating characters with vague expressions and an ambiguous gaze, which form the symbol of Japanese people today.

Fujiwara's sculptures standing directly on the floor attract people with their eerie reality. Their intricate surfaces sculpted by hand, emanating both a coldness and warmth, provoke an irresistible desire to touch the works, leading one to a confused standpoint between user (of ceramics) and viewer (of art works), creating an exceptionally intimate personal space in which one may engage with them. This is special characteristic of Fujiwara's works, and his works' tactile quality is unique and invites the viewers to question the distance between them and artworks.

Having spent time working in London, he has also developed the notion of identity as a Japanese artist. Born and raised in Mashiko city, famous for its pottery, Mashiko-yaki, growing up with a close familiarity with ceramics, he found the necessity to pursue a practice which crosses the border between sculpture and ceramics, simultaneously pointing towards the universal expression of humanity and the expressions of people in contemporary Japan. Fujiwara takes these different elements and allows them to bounce off each other, to create a deeper form of sculptural art work. Furthermore in his relief works, he not only deals with the idea of universal humanity, but also engages in more conceptual explorations. In the works of Fujiwara we may find a unique expression of both the universal and the modern day.

This exhibition will present Fujiwara's recent full-length statues, busts, ceramic reliefs and drawing sculptures and it is here that we find the universal but contemporary theme of "people who are here, but not quite here".